Art of the Americas, the 20th Century

Each room in this new suite of galleries presents a single chapter in the larger history of 20th-century art from the Americas. Together they span place and time, and explore different themes—from Native perspectives on the Southwest to ways artists reckoned with the traumas of World War II, from the knotty politics of Latin American realism to the vibrant links between art, design, and jazz. As in reading an anthology, visitors are invited to consider each space independently, or to think about the threads that weave together a larger whole.

Many of the artists represented here devoted their lives and careers to resisting and reimagining conventions. Through their work, these galleries tell stories about boundaries crossed, borders challenged. Icons from the MFA’s collection appear alongside works by underrecognized artists, creating combinations, juxtapositions, and connections that make room for questions as well as possibilities.

“Stories Artists Tell: Art of the Americas, the 20th Century” also gives context to a series of changing exhibitions in the central gallery (Gallery 332). The first, “Touching Roots: Black Ancestral Legacies in the Americas,” brings together work by Black artists who engaged with African artistic traditions, aesthetic expressions, and sacred practices.

To acknowledge the cultural heritage of many visitors, as well as some of the artists with work on view, introductory gallery texts are presented in both Spanish and English.

Oil and wax on canvas. Gift of the William H. Lane Foundation.

Oil on Masonite. Museum purchase with funds by exchange from the Alfred Stieglitz Collection—Bequest of Georgia O’Keeffe, and a Gift of the Stephen and Sybil Stone Foundation. © Estate of Remedios Varo / Artists Rights Society (ARS), New York.

Oil on Masonite. Gift of William H. and Saundra B. Lane and The Hayden Collection—Charles Henry Hayden Fund, by exchange.

Acrylic on canvas. The Betty Mayland Ellis Fund for Canadian Paintings. Authentication and Permission granted by the Estate of Norval Morrisseau. OfficialMorrisseau.com

Oil and asphalt on board. Gift of James and Margie Krebs. © Mateo Romero.

This gallery explores the intersections of art and jazz between the 1920s and ’50s, and highlights the essential influence of Black culture on American life. Many artists tried to interpret the radical essence of this distinctively African American art form in their own medium. Here, photographs document performers and performances, Norman Lewis’s Harlem Jazz Jamboree (1943) and other paintings attempt to translate the music into visual form, designs by Elsa Tennhardt and others evoke jazz rhythms or movement, and fashion styles from the Jazz Age show how the music was codified into a culture. All demonstrate that, by the 1920s, jazz was not just simply the latest trend in popular music—it had become synonymous with American modernity. 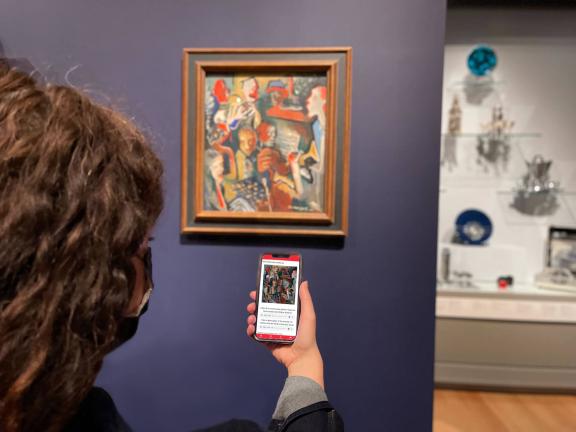 In the spirit of the call-and-response practice in jazz, we turned the tables and invited renowned local musicians to react to selected artworks through both words and music. Download the MFA Mobile app onto your smartphone from Apple’s App Store or Google Play, or access it on the web. For the best audio experience in the gallery, use your ear buds or headphones. 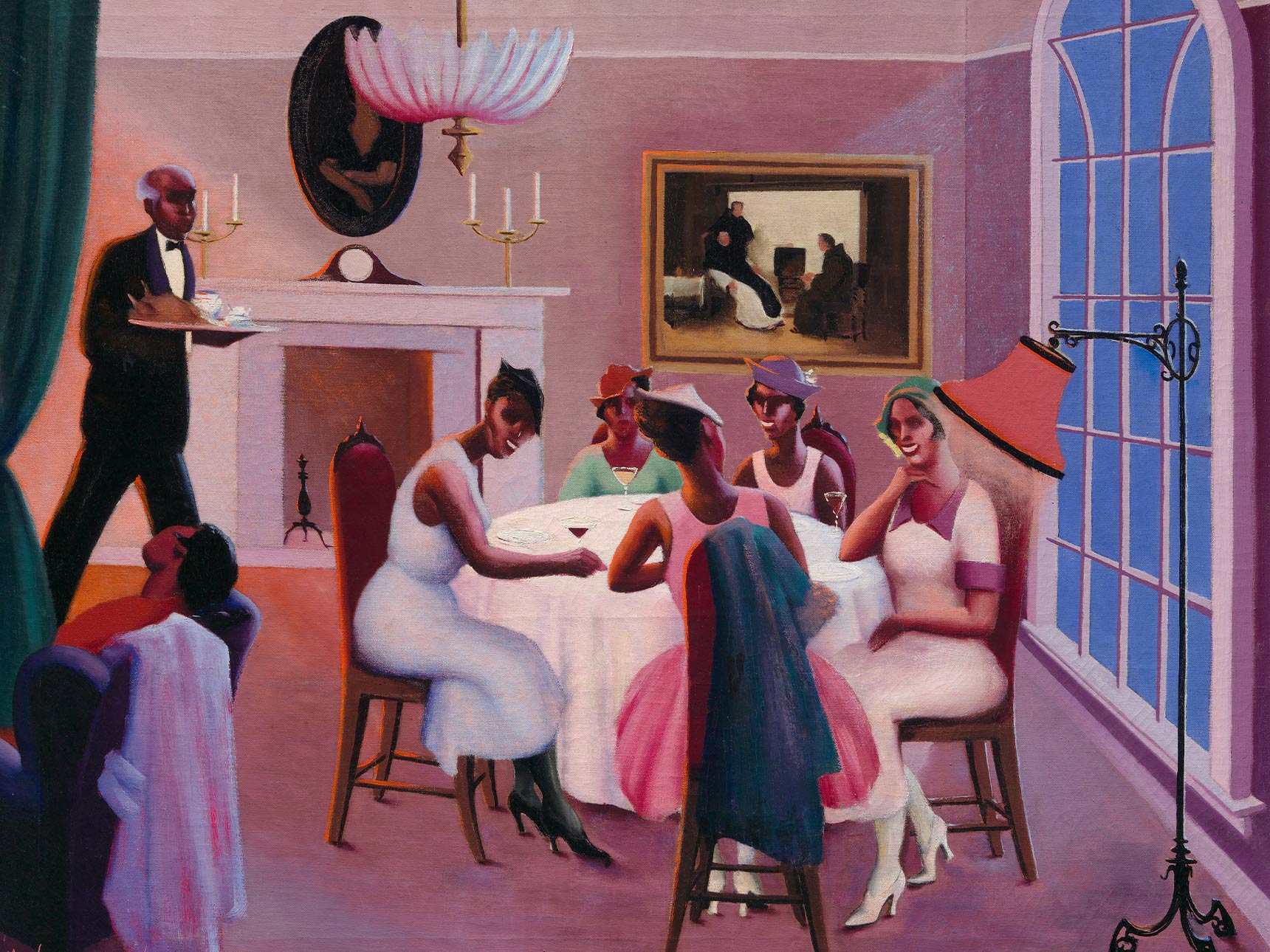 See works inspired by jazz’s rhythm, stories, and expression—all depicting and celebrating the experiences of Black Americans in the first half of the 20th century.

A Little Bit of the Southwest

The American Southwest is vast and diverse. Artistic practices in intricate weaving, pottery, and jewelry making stretch back to ancient times. In the 20th century, non-Native artists visited and moved to the region, contributing to and benefiting from its romanticized reputation. Instead of highlighting these dramatic landscapes of mesas, desert, and endless skies, this gallery showcases the work of a few Southwest Native artists from the 19th century to today. Imaginative drawings, watercolors, and oil paintings point to the Southwest’s significance as a center of learning for Native artists since the early 20th century. Interwoven with these works, glistening black-on-black ware by Maria Martinez and Margaret Tafoya, dazzling wool weavings, and silver and stone jewelry highlight age-old and ongoing Indigenous artistic traditions.

War and Spirituality at Midcentury

This gallery features an array of artistic responses to World War II that range freely across boundaries of style, mood, and nationality. All the works were born in the shadow of war, though they don’t necessarily portray it. Some painters and sculptors used figuration to communicate ideas about the struggle of the body and the transcendence of the spirit. Others turned to abstraction, trading familiar forms for pure energy, simultaneously destructive and revitalizing. Works like Karl Knaths’s mural study Day of Atonement (1939), Hyman Bloom’s Female Corpse, Back View (1947), Jackson Pollock’s Troubled Queen (1945), and Norman Lewis’s Every Atom Glows: Electrons in Luminous Vibration (1951) are meditations on fear, doubt, hope, and belief in the face of global destruction—and the possibilities that arose in its wake.

In the 20th century, painters and photographers developed a language of abstraction that drew inspiration from the elements and forces of nature. Artists like Arthur Dove and Georgia O’Keeffe looked away from the rapid industrialization of the cities and sought a return to the rhythms of the natural world. Since time immemorial, different Indigenous communities have incorporated abstracted depictions of plants, water, seasons, and animals into their art and religions, and in more recent decades, artists including Norval Morrisseau (Bingwi Neyaashi Anishinaabek First Nation) have translated ancestral knowledge of ecology into painting, sculpture, and printmaking. This gallery features work by Native and non-Native artists who refused to separate abstraction and representation. All shared interests in the connections between humans and the environment, and looked to nature as a starting point for awakening new forms of art.

Across diverse countries, cultures, landscapes, and languages, modern Latin American artists have experimented with ways to represent people. Spurred by the muralism and printmaking movements that followed the Mexican Revolution (1910–20), many artists called for social change by depicting communities that had long remained invisible in fine art. Others rejected the idea that art must serve politics and imagined entirely new types of bodies, human and supernatural, moving through dreamlike spaces. In a range of styles and media, the works in this gallery offer different visions of the realities of human experiences—from Claudio Bravo’s photorealistic Portrait of Mr. Couchez (1978) to Remedios Varo’s imaginative portrayal of a fantastic world in Tailleur pour dames (Tailor for Ladies) (1957), from Maria Auxiliadora da Silva’s hectic scene of São Paulo (1971) to David Alfaro Siqueiros’s introspective study of the self (1937).

In their quest to reinvent their work, many modern artists were inspired by folk or vernacular art by self-taught painters and artisans. They admired these works for their simplified forms, bold colors, and surface patterning. Some believed vernacular art to be an essential expression of its given region and used it to promote nationalist agendas, while others felt such works communicated a universal, human drive for creativity. This gallery juxtaposes old with new, trained with untrained, and functional with decorative—all in an attempt to question how we categorize art. Works by modernists who adopted vernacular methods and techniques stand alongside curbstones turned into human figures, paintings that defy conventions of perspective and modeling, and other expressive objects by makers active outside traditional art centers.