After several weeks of examination, research, and testing, conservation work has begun on the painting. Here's a look at some of the studies behind the treatment.

Conservators first reviewed all conservation records filed since the painting came into the collection in 1956. The only major treatment was in 1972, prompted by concerns about the stability of the fragile paints and original fabric support. The painting was overall adhered (lined) with wax-resin adhesive to a second piece of fabric. This was intended to simultaneously strengthen the original support and secure the cracked paints. Though the approach was typical for the time, it was not completely effective in stabilizing the vulnerable paint. In addition, the lining adhesive is now the source of the wax deposits on the surface.

Below is the back of the painting before lining. The original linen support and wooden stretcher are visible, as well as various stains and the silhouette of the figure of Camille. A stamp on the canvas, faintly discernible below the first horizontal crossbar, indicates that it came from a well-known Parisian supplier of artists' materials—valuable information as research continues into Monet's materials and technique. 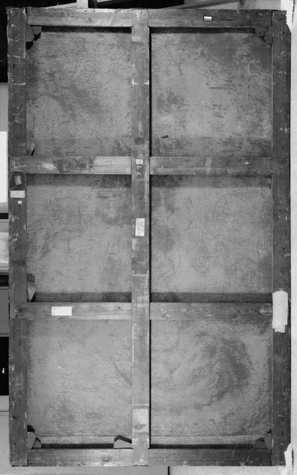 The 1972 treatment also included work on the painted side of the canvas. A deeply yellowed natural resin varnish was removed to varying degrees, followed by a synthetic varnish applied to the entire surface. These are the varnishes conservators are now working to remove.

Scientific analysis has provided a possible source for the flaking in some dark red areas. Cross-sections (about the size of a pinhead) reveal three layers of paint: a thin, dark red glaze on top; a mixture of the glaze and an opaque red-orange paint in the middle; and a bottom layer of opaque red-orange. All three layers contain varying amounts of starch, perhaps added as an extender to make the paint go further. The flake losses developed in the upper glaze layer, where the starch is associated with tiny fissures which may undermine the paint's coherence. 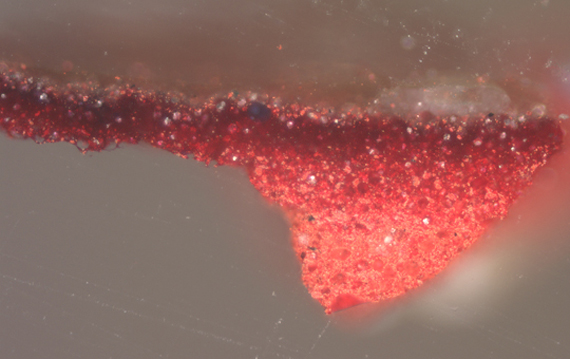 The colorants of the paint glow like jewels in the image above. Below, under ultraviolet light, the starch is visible as blue globules. 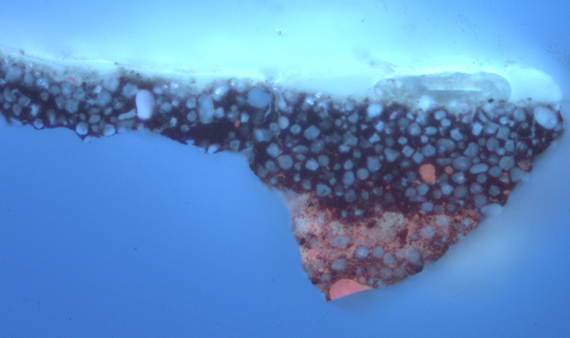 Here is an image taken through the microscope, at about 12.5 times the actual size. The fuzzy white material in and around the cracks is degraded wax. It is present along most cracks all over the painting and is the reason for the misty quality. 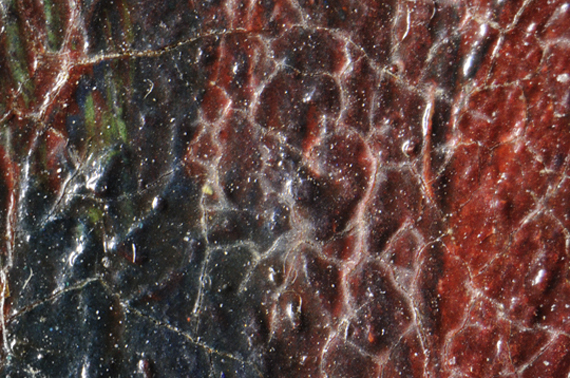 Below are details of the lower half of the figure's robe. At left, the image shows cracks in normal light. At right, the same area is lit from only one direction (raking light). This exaggerates the relief of the lifted cracks but illustrates why they are one focus of the current treatment. 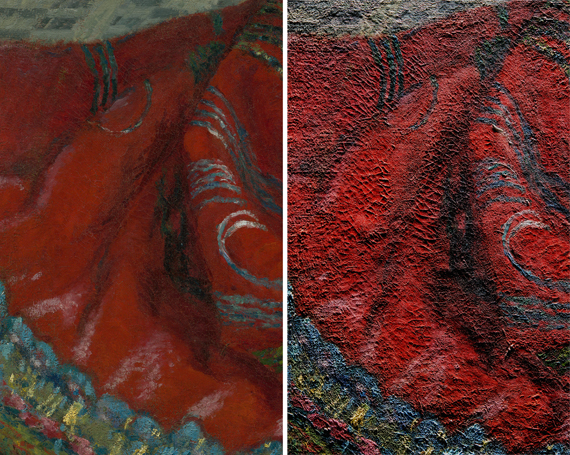