In the past month, significant strides have been made in the stabilization and study of the minbar door. First, the various components of the door were dismantled so that they could be better accessed for stabilization, cleaning, and examination. The doorway is now in four separate pieces: the frame, the top with its muqarnas decoration, the mashrabiyya panel, and the back board with its star pattern.

Curators and conservators have also had a number of good conversations about the puzzle of its construction. For example, some components seem to be attached haphazardly (the mashrabiyya panel hardly fits in the recess into which it was nailed), while others have lovely ivory pins that hold them in place (all of the ivory plaques in the photo below seem to be joined with both adhesive and carefully carved pins). 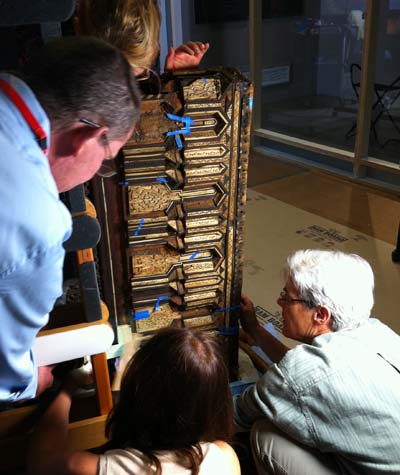 An adjustable table has been constructed to hold the door frame so that conservators can work from different angles, tilting the door up and down as needed. 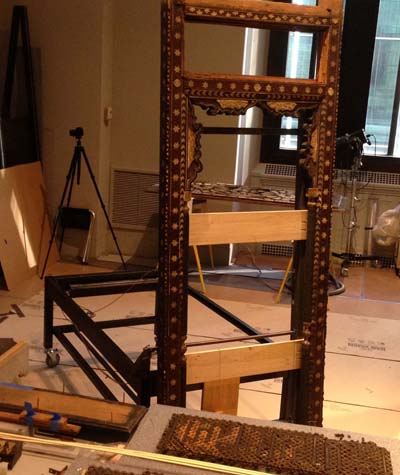 In researching the history of the door and its provenance, a great discovery was made—the door was displayed in 1876, the year before it entered the MFA collection, at the Centennial Exhibition in Philadelphia, in the Egypt Section. The Centennial Exhibition was the first world’s fair to be held in the United States. A description of the Egypt Section appears in J. S. Ingram’s The Centennial Exposition, in which he says that "there were several other articles of a religious character, or connected with funereal rites, deserving of attention. Among them was the door of a mosque from Cairo, carved and inlaid with ebony and ivory, and dating from the fourteenth century" (p. 548). This seemed quite likely to be a reference to the MFA door, but curators could not be sure without an image.

Thanks to some good luck, an image of the door at the Centennial Exhibition was found on the website of the Library Company of Philadelphia, a research library founded by Benjamin Franklin in 1731. The door appears to have been displayed with other objects, including a carpet and what looks to be a modern sculpture in an ancient Egyptian style. The Library Company has an archive of documents and photos from world’s fairs, so curators and conservators hope to visit Philadelphia soon to look for additional images and find out more about where and how the door was displayed.

This discovery has led to more questions. Is it a mosque door or a minbar door? And were parts of it made for the Centennial Exhibition, while other parts are truly medieval? What were the conditions under which it came from the Exhibition to the MFA? Research into these aspects of the project is ongoing.