In parallel to the conservation treatment, study of the technical and material aspects of the minbar was conducted to gain insight into the origins and history of the object. The central panel within the doorway had been assembled from many individual elements to form a single panel. Originally this space housed two doors but had been modified to hold a single panel. The individual ivory plaques of this panel may originally have been part of the side of a minbar. To help determine if all of the different components of the minbar were of the same date and constructed from similar materials, extensive analysis was undertaken, from identification of the individual woods to the colored infill materials used in some of the incised decoration of the ivory plaques.

Wood identification showed that the main frame and inscription panel at the base of the central panel were made of Aleppo pine, a wood native to the region of Egypt and the Mediterranean, and that the frame was inlaid with ebony and ivory. The mashrabiyya was turned from boxwood, and the border of the decorative plaques was constructed of Abura (Mitragyna ciliate). All of these woods were appropriate for use in the construction of a minbar from this part of the Islamic world.

In addition, six wood samples from different parts of the object were sent to an independent scientific lab specializing in C-14 dating of organic samples. This technique can determine the percentage of the carbon-14 isotope in a sample and extrapolate a date range for when the wood was felled. All of the samples were consistently early and ranged from the mid-fourteenth to mid-fifteenth century. It was a particular surprise that none of the samples taken were from the nineteenth century, as it was expected that some later additions were included prior to display in the 1876 Centennial Exhibition.

X-rays, taken prior to the structural conservation work on the frame and cornice to help design appropriate stabilization methods, also revealed some interesting information on the decorative details on the inside of the doorway frame. X-rays of the ebony columns and curving inlaid decoration at the top and sides showed attachment methods suggesting these elements may have been used in a previous setting and had been added to the frame possibly for the 1876 World’s Fair. Below is the central panel being X-rayed. 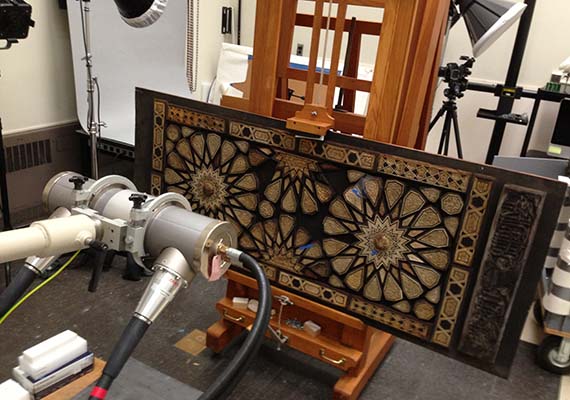 Analysis was also carried out on very small areas of red and green fills on the incised and carved ivory plaques. The composition of these fills was determined by X-ray fluorescence spectrometry, a non-destructive technique that does not require the taking of a sample. Results showed that the fills were composed of beeswax mixed with hematite for the red fill and a copper salt of a fatty acid for the green fills. 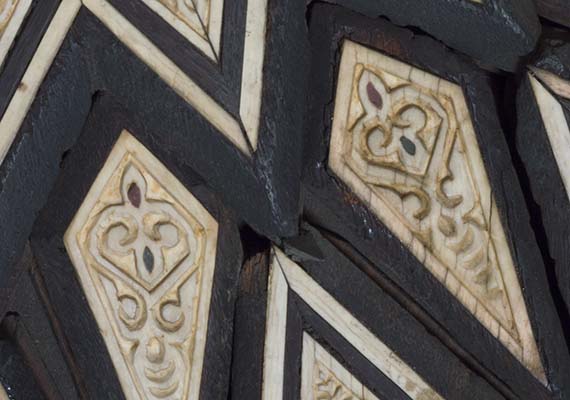 Although the conservation treatment is complete, research into the minbar continues with study of comparable objects to further understanding of this fabulous example of Mamluk woodwork. This project was initiated to allow the minbar to be the central object in a major touring exhibition of the Museum’s Islamic artworks. At the conclusion of the exhibition, the minbar will be installed in the Islamic Art gallery at the MFA.