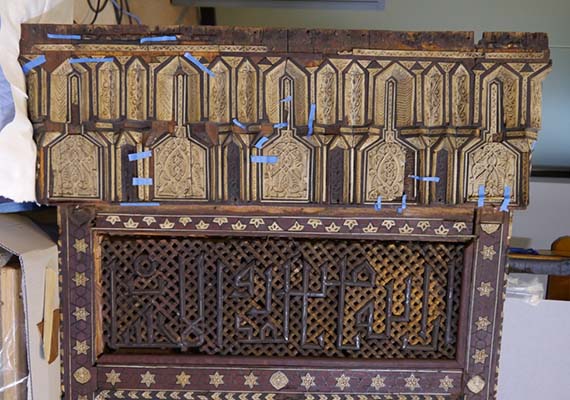 The frame of the doorway was constructed using mortise and tenon pegged joinery, with a large and precariously attached cornice at the top (see image above). Because of the instability of the cornice, it has been carefully removed to allow for its separate stabilization and conservation. This enabled access to the broken and unstable joinery at the top of the main frame, which was reinforced and stabilized by the addition of a new frame element that will be hidden when the cornice is reattached. The addition will provide a safer method for supporting and attaching the heavy cornice element.

Major stabilization was also required on the mashrabiyya (wood lattice) panels, inset into the frame beneath the cornice. These delicate turned and jointed wooden elements, which form an intricate geometrical background for applied strips of ebony with inset ivory stringing, are by far the most fragile and unstable elements on the entire minbar. 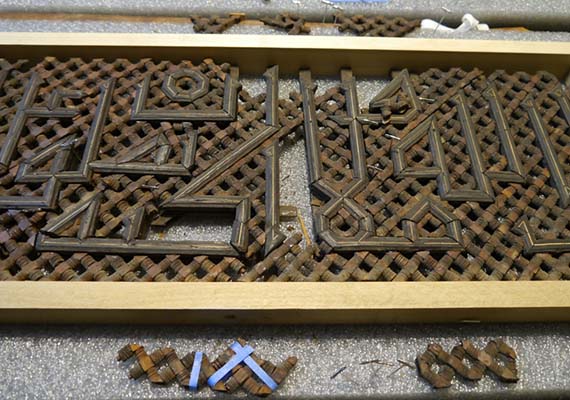 They required extensive stabilization involving the creation of a new framing support structure to which the original mashrabiyya design was tied with thread. This unusual form of stabilization worked perfectly to stabilize the delicate panels without altering or damaging their original form. 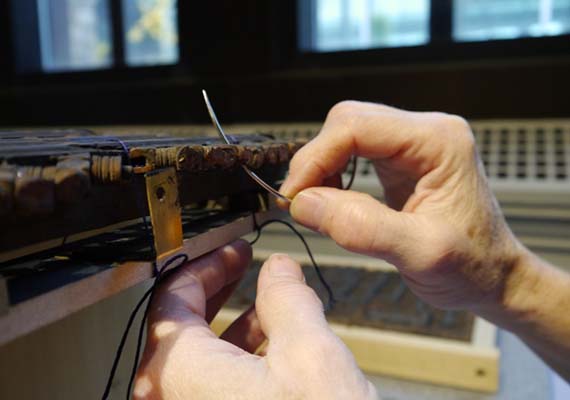 Following the major structural treatment, it was necessary to stabilize or reattach many lifting pieces of stringing and decorative inlay. This was accomplished by injecting animal adhesive behind the lifting elements and clamping or weighting until the adhesive set. The entire surface was very dusty and dirty, and many tests were performed to determine the best and safest method for evenly cleaning the different types of material which compose the minbar. Various solvent cleaning methods were tested but proved to be unsuitable, especially for the ivory elements. Therefore dry cleaning methods were employed, starting with vacuuming and followed by the use of eraser crumbs. Rolling eraser crumbs over the surface under light finger pressure resulted in much greater clarity in the different design elements, such as the carved and inlaid ivory and the ebony and ivory stringing. 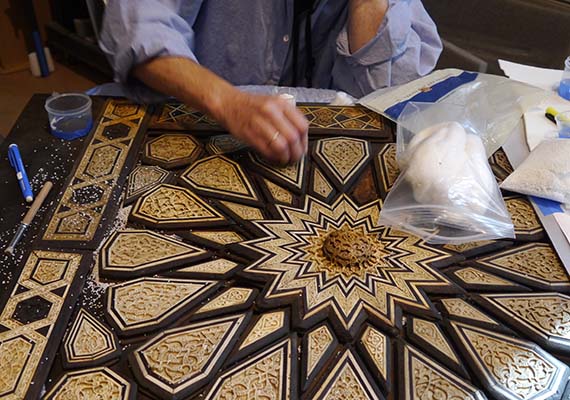 To complete the conservation treatment, certain missing elements distracting to the viewer were replaced. Molds were taken from several existing ivory design elements, and a casting material was used to pour replacement pieces that were then colored to match the original. The replacements are made of a synthetic resin and will show up very clearly under ultra violet light, as their fluorescence is markedly different from that of all of the original materials. Below is a diagram showing the areas replaced.